A Tragedy for the Boston Red Sox Tonight 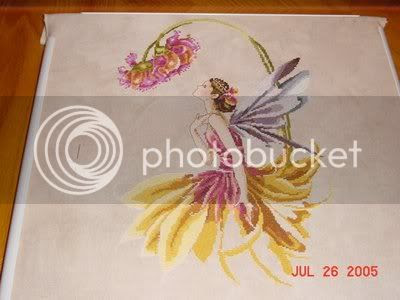 More progress on the lily petal skirt of Petal Fairy tonight. I didn't get as much done as I thought I would due to witnessing the tragedy in the Red Sox game tonight (see end of entry for the details) which totally distracted me and turned my stomach... Now she gets put aside for at least a day because tomorrow is Legends of the Dragons SAL day, and I plan to keep up with that one.... just as well, I am sure you are all getting bored with seeing this same fairy every day anyhow.

I didn't expect to be buying a Silkweaver Solo today, but came across this one while surfing. Karen has been asking about doing a Fairy Idyll SAL, and I was thinking this one might the right size and a good green color to use for it.... :-)

The mailman brought me my Holly Noel chart/embellishments today... as well as a pretty chart I got on ebay to surprise yet another one of my friends :-) 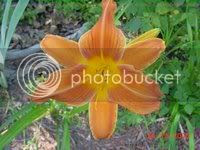 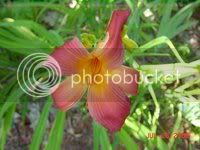 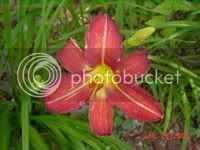 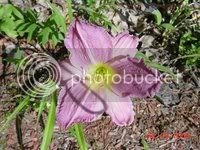 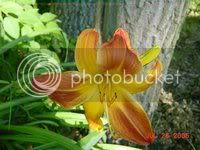 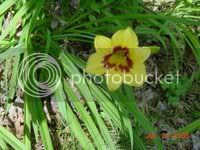 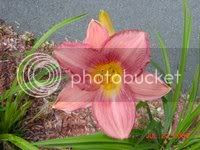 Daylily: Mother Superior (not doubling yet this year) 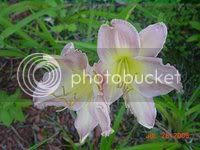 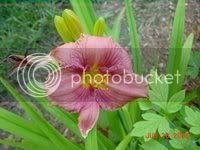 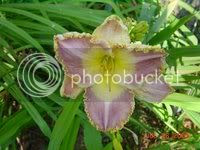 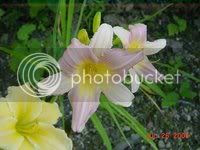 Red Sox 10, Devil Rays 9 - it was a hard fought 10 inning game.... which appeared at first would be a rout, until bottom of the third inning when... oh, when our pitcher, Matt Clement, got smacked in the right side of his head (near his ear or was his temple, no word where quite yet) and was knocked down, didn't move.... Very scary!! He was taken off of the field in total silence on a back board on a stretcher and rushed to the hospital in Florida. The first update came in about an hour later as a statement from the Red Sox saying he 'never lost consciousness, was alert, aware of his surroundings and knew what had happened to him.' Another hour or so later, another update came in that his CAT scan was negative and he was in bright spirits... this, however, still is a bad thing. On top of that, Trot Nixon pulled/twisted or somehow damaged his left oblique muscle even earlier in the game while he was batting.... ouch, he will be out for a bit! Darn! But thanks to Johnny Damon and Jason Varitek, we did pull out the win! Thanks to the whole team, really. I hope they did it for Matt :-)

Hey Carol!
Today is my first day to get back into reading blogs...I can see you have been busy! WOW, your progress on PF looks awesome! The shop I visited had her framed and hanging as a model-she was breathtaking! I can't wait to see yours all finished :)

Your pretties from the garden are lovely as always! You have such a happy garden :)

I got a phone call today that your B-day gift is ready to be picked up...it may be a little late as far as getting mailed out to you-I am going to try to go pick it up on Thursday :)

I enjoyed visiting with you this evening :) :)

I could never get bored of seeing your progress of petal fairy. I even added this design to my wish list.

Hi Carol, I love seeing your updates. The boys have not done much since I took that pic of their stitching lol. In fact I have done much either so I best get cracking today so that I can put up some more pics lol.

Love you flowers to always nice and bright to see in a morning.

At first I was admiring all your purchases and all your lovely blooms as the days goes by, me and my colleagues begins to wonder how are you going to complete all the stash that you have when each day there is new stuff.

The 3 of us thinks that either you own a shop, or keep them or extremely wealthy to be buying things all the time as from the blooms...so many flowers..even I can't tell which is which and you have listed all their names. I'm beginning to think you live in a castle as you can have all the flowers and they are ALOT!!

How do you grow them as I can't even grow beansprouts.

Wow - petal fairy is really really close! I Love the petal skirt on her.

I have been working on Legends at lunch time a bit, unfortunately I can't work on it tonight as I really really need to take a practice GRE... unless I watch a movie tonight instead. Anyway, maybe I will post my progress tomorrow too, i'm looking forward to seeing yours!

Carol,
Progress is Petal fairy is awesome!!!
Sorry to hear of some of the team members of the Sox. Hope they will be ok soon.

I am sorry to read of the accident in field... I hope he recoves fully. I am still amazed by your many lilies photos. I had now idea there were so many varieties. and they are so beautifull. Is your garden a big one?
Barbara