Another Christmas Ornament, and an Easter Exchange Arrived

I stitched up another ornament for my gift basket a few days ago - finally! 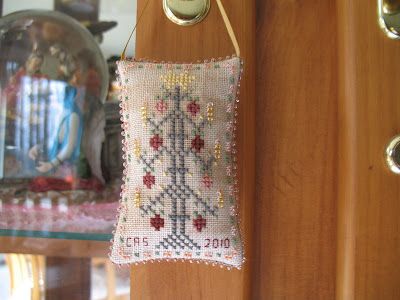 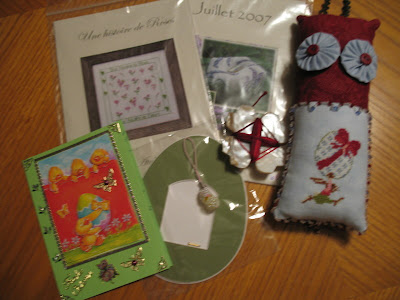 Today I received my Easter exchange from Gaby. I apologize that my photo is blurry. I didn't realize it until I downloaded it. She stitched a super cute design of a bunny running with an Easter Egg - she wrote that it is from a German magazine. I love the design. She made it into a large hanging pillow with a pair of yo yos stitched on. She also sent a tiny beaded ornament of a chick in an egg... and other treats as seen above. Love the handmade German Easter card - thanks Gaby - hope you are feeling better now. 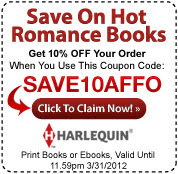 I received an email from Meghan today letting me know that she has received the Easter Exchange that I sent to her. She is so cute - loved her email, she is busy picking out a prom dress... remember those days?? She put some good photos up of what I sent to her here. It was fun putting goodies together for her! Glad you like it! 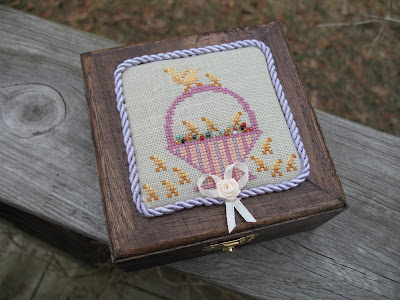 And speaking of high school and things from so long ago... I have not seen an old high school friend of mine since June of 1981... which was when we graduated from high school... we recently reconnected on Facebook, and her father passed away. He still lived locally, so Lee and her family came up for the funeral. Of course I went... and here I am with her three really lovely daughters (and one sleeping granddaughter) at the funeral home. I rarely have any pictures of me, and my Facebook friends have seen this already... for the rest of you... well, here you are...I am the one furthest back in the photo in the beige sweater...the one who most obviously graduated from high school in 1981 :-) 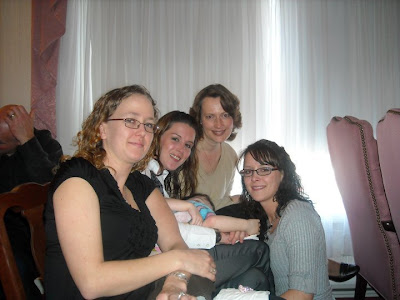 Currently stitching: Stitching a Christmas ornament, and working on CaHRH
Posted by Carol at Saturday, March 20, 2010 10 comments: Links to this post

The HoE LHN/CCN exchange I stitched for Lillie has made its long journey to Malaysia, and now I can show it to you... I really loved how this one came out, and parting with it was a little trickier than usual! I had no idea what this would turn out to be... I loved the design, so I chose it. Lillie strikes me as a very sunny person, so I wanted to go summery/sunny for her. Then I suddenly felt a compulsion to stitch it one-over-one... but how to finish it?? A fob? Nah. A needlebook? Oooo, cool idea... but uh-oh - I should have started elsewhere on my linen so I would have a linen backing for the needlebook, so... pass.... then, OK - found good cotton fabric for the back and the sweet satin rose... and voila - a pinkeep! I sent her plenty of goodies - I think those can be seen on her blog or the HoE blog... the photo I took of them is far too blurry to bother to post :-) 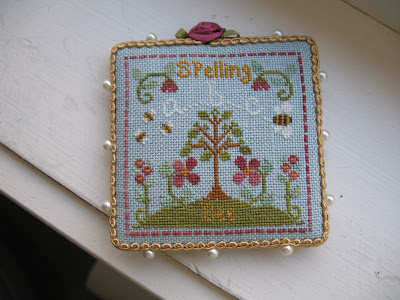 Currently Stitching: CaHRH and preparing to start another Christmas Ornament
Posted by Carol at Tuesday, March 16, 2010 20 comments: Links to this post

The mailman delivered a very heavy priority mail package this morning. I have been utterly spoiled rotten by Janet for the HoE LHN/CCN Exchange. This was Janet's first exchange, and she went over the top, way above and beyond! I apologize straight up for the poor photo quality. I should have gone out to the porch to take photos, but we are having a bit of a windstorm here this weekend, so I used the kitchen table instead.... 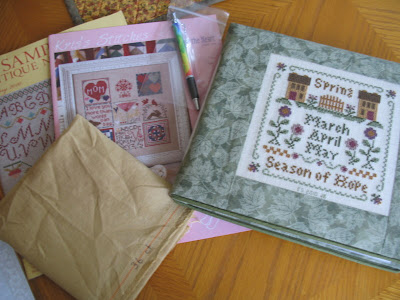 Janet stitched me an album! I will describe it more below - along with it some 36 ct linen she hand dyed for me, the latest issue of SANQ (I had just let my subscription expire due to the economy) and a really pretty chart I had not yet seen that is dedicated in the memory of Kris Stott - it is chock full of great charts for smalls - by many of my favorite designers! She also enclosed a pen from her ebay shop ;-) 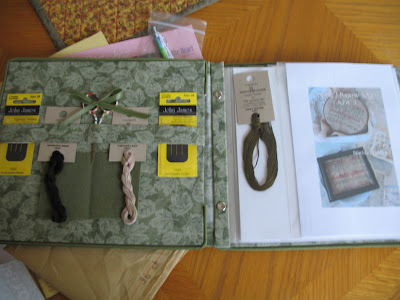 Inside the album... many pages full of goodies! Here is the inside cover and an example of a page - she included John James needles, a pretty pair of Premax scissors and several skeins of overdyed floss.... and some on later pages that appear to be ones she dyed herself for her shop and they are super nice! In the album are two more patterns for me -which I love!! See.... SPOILED! I cannot thank Janet enough. I cannot wait to use this - in fact, I will tonight! This will be an heirloom!

Just finished my Easter Exchange today - in time for the mailing date on Monday ;-)

Currently stitching: CaHRH, and going to start another Christmas Ornament for my gift basket...
Posted by Carol at Saturday, March 13, 2010 19 comments: Links to this post 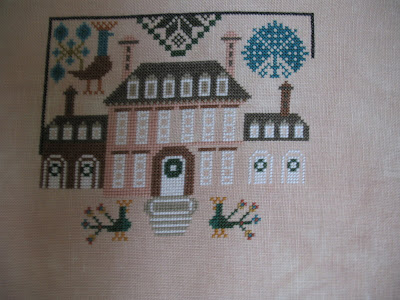 I figured it is time to show an update of CaHRH. As you can see, I am still working the first block I started. It is a very dense block. I have been able to put spurts of time into it, but no consistent schedule. I am enjoying it, though! I have been busy with stitching my LHN/CCN and Easter Exchanges of late. Have been ill with stomach issues - in the hospital recently, recovering well now. Sure hope to post my next CaHRH update soon!

My Witching for Stitching RR came home last week - I hope to get a photo this weekend to share. It is so cute!