I actually finished something that is not an ornament...

Hard to believe, yet it is true. I finished stitching something that is not a Christmas ornament... I had started Earth Sampler in early 2011 shortly after its designer, Lisa Roswell, died tragically. I wanted to stitch this in her memory. I chugged along and was making rapid progress, and then the dreaded (and still ever present) tinnitus set in. I struggled through the numbers at the bottom and part of the hand, but just could not focus and stitch when the tinnitus was so new, so loud, so painful and causing migraines... Almost exactly two years later, I have come to some level of acceptance and it has improved some (no more migraines thanks to neuromuscular dentist) - I came across this sampler earlier this week and all I had left to stitch was four fingers! So, I got right on that... and now I actually have a finish to share. 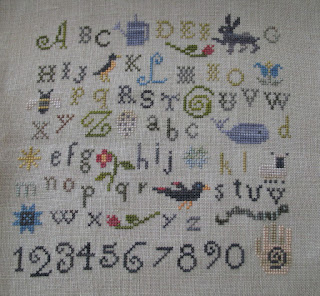 Earth Sampler
The Primitive Needle
Lakeside Linens 40 ct Pear Linen, WDW and GAST Floss
Sadly, I cannot seem to get a photo that shows the true, beautiful color of the Pear linen. It is still "winter" here despite meteorlogical spring.... no chance to get any good natural daylight yet.
Posted by Carol at Friday, March 08, 2013

I so love her designs, and your finish is great!

Such a sweet finish!

Congratulations! consider yourself and your perfect stitching applauded.

Oh, I love this one. Good that you have finished it. It's also in my stash and I think I'll stitch it soon.

Congratulations on your finish.

I love her designs, just finished a Halloween design of hers. Beautiful finish!

My, my what a beautiful finish ~ And will you be framing this? Love that design.

What a gorgeous finish Carol.

Congrats on a wonderful finish!

It's beautiful! I have it in process somewhere among my stash.

My mother suffered from tinnitus and it is something I would no wish upon anyone. To see her progress from the beginning to the end was a struggle for me to see and her death recently due to other causes was a blessing as she no longer had to suffer with tinnitus. It robbed so much life from her. I wish you much strength in the future.