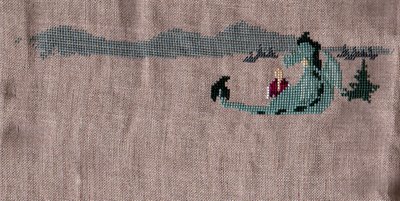 Tonight is the second night of the Kingdom Sampler SAL... here is where I got up to tonight. It may look like an awful lot, but it is important to note that all of that blue is done in half stitch :-) This sampler will actually be a fairly quick stitch since there is a whole lot of half stitching in it... but I think it is so cute :-)

Some people are idiots. Cannot say that more simply enough. I was driving home tonight up Interstate 93 in New Hampshire, which is a twisty two lane highway. I was in the left lane driving a large Jeep Grand Cherokee, and I was driving alongside a WalMart semi-trailer. And suddenly I heard a roar, only to see that some idiot on a motorcycle decided to take the teeny tiny space between myself and the huge truck and make it into a third lane! I was just amazed at how stupid he was! Geesh! And, then to learn today that the Ben Roethlesberger (I cannot spell his name), the quarterback of the Pittsburgh Steelers also happened to be in a serious motorcycle accident today - no helmet, serious head injuries!! - geesh, come on. I hope he will be well, though. I am a NE Patriots fan, but wish no harm on anyone!

Blessings to those in Florida tonight, as they face the first tropical storm and/or hurricane of the season in the early morning (already!!).

Oh, rummaging through the DVD Dump Bin at WalMart yielded Dave today - that's a fun one :-)

Aw that is such a cute sampler, Carol! Must feel good to feel you are making quick progress on that one, as compared to your huge MTM!

Great progress on the Kingdom Sampler, Carol!
I was busy during the past days and I couldn't post before today. I read your message: I'm ready for The rose of Sharon, I have the fabrics and the threads. When you prefer, we can start stitching it!
Have a nice day!

Kingdom Sampler is off to a great start! And we have lots of those idiot motorcyclists here, who create 3rd lanes without warning. Scary!

I agree Carol - for the most part motorcyclist are safe but gee there are some real idiots around - I see this type of behaviour all the tIme!

Great progress on the Kingdom Sampler! I will post my QOH progress tomorrow :)

We have the same idiot motocyclists over here Carol.

I love your dragon piece (and I'm not even into dragon's). I'm glad you clarified the half stitch part because I knew you were a turbo stitcher but my eyes did pop out a little bit when I first looked at this, since your last posting on it you didn't have that much done.

I'm not surprised to see so much progress, I'm used to it with Legends :) I love seeing the other side of this sampler come to life as well!

Wow, it is stitching up fast and it looks great! Oh, and sometimes I think that is why guys buy motorcycles, so they can zip in between. I see it a lot on I-95; they really fly sometimes!

the sampler looks great. I am not a motorcycle fan at all and it is because of the idiots like that. He could have been sucked in under the tractor trailer. Oh and Carol what movies are on for today?

Your Kingdom sampler is cute (so far)! I've set my stitching aside for 'finishing' -- which I have little flair or talent.

Goodness, your motorcycle rider needs to learn some patience. What a dare-devil. I'm on the road a lot picking-up & dropping-off the kids AND cannot believe the idiotic things drivers do.

Love the blues in this Kingdom Sampler, Carol!
Motorcycles can be fun, but scary too. I made sure my dh parked his after our second baby was born. He still looks at some of them longingly, but I tell him he doesn't have enough life insurance. hehehe

Well, I guess it's time to resurrect Kingdom Sampler from my WIP UFO's. I was bored with it when I started it but I think that is becuase I started with the clouds. You were smart to start with the dragon...and I love dragons. Nice stitching.

Kingdom Sampler is looking great - it's stitching up really quickly :) And MTM is as always looking absolutely stunning! You're sooooo close to getting this one finished now - just beautiful :D Mermaids are looking great too :)