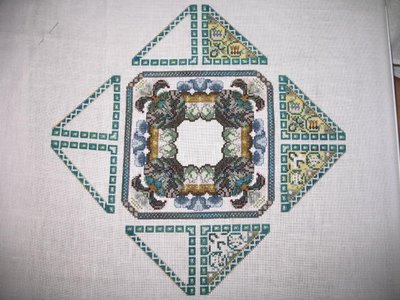 For some reason, Martina released the password for Mystery IX early this month. She has not done so for Medieval Town Mandala as of yet, though (??). So, instead of doing whatever I wanted this weekend, I am first starting off with doing Part 5 - should be done tomorrow, and then I can pick up Mermaid Heaven :-) I did not get as much done as I had hoped I would tonight. I found that there is a significant charting error in part 5, which led to about an hour of deciphering and frogging for me. What Martina told us to do in the triangle at 3 o'clock back in Part 3 was not charted the same in Part 5 - it all works out in the end, but I relied on the previous stitches to place some of my new ones... and that threw a lot of things off! Yikes! 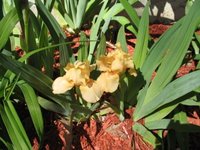 There were some pretties in my garden today :-) I am surprised again this year how quickly I am getting iris blooms in the south/southwest section of my garden! Here, already, is a pretty apricot iris... my gardening brain is so numb right now that I cannot even recall what the proper name for these short irises is! (**Brain cramp has passed, it is a "standard dwarf iris"). Let alone the name of this specific cultivar. I just know right now that it is pretty! (I got a little obsessed and looked at my photo database for ages... my guess is it is Peachy Face, but that one should have a ring of paler peach at the outer edges... have no other peach dwarf irises in my garden log though??) 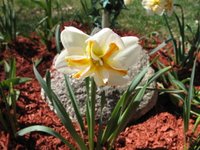 And, some daffodils blooming around the butterfly house for the first time ever. We bought these bulbs in Boston at Faneuil Hall last fall. The package card with the variety's name is hanging on the wall in my garage. But I am too lazy to go look for it! (I went and looked, it is called Trepolo). 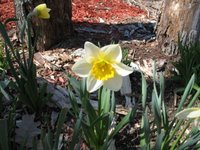 This is one of my all-time favorite daffodils, been coming up here since our first year (planted them right away). They are called 'Amor.' I have some other pics, but I don't want to overload the entry with all that many graphics for you!! Oddly, I really don't lean towards the standard big yellow daffodils... yet, I do like them! I will plant some this fall - I think I need some!!

It is the weekend - finally! I stopped off for a hair cut and eyebrow wax after dinner tonight... off to a good start :-)

Your mermaids look great! Congrats on finishing their hair. They are soo pretty.

Yes!! Finally the blooms. I'm looking forward to them. Beautiful!! Keep on coming and blooming.

We don't get those flowers in Singapore anyway. Have a great weekend and happy stitching.

Yay! It's that time of year! I love looking at all of your flower photos and am glad that they are beginning. :) Those Trepolo daffodils are GORGEOUS! I'm not a huge fan of the traditional daffodil shape, so these are right up my alley. ;) I hope that you have a wonderful weekend!

I love your irises Carol!
I've checked out your flower photos and you have outstanding ones.
I just put in about 12 or so new ones and some are about to bloom. I added gladiolus and other bulbs in the same garden. Not sure if I like the idea of digging up the glads every year.

Cool-someone else who likes the red mulch like I do! ; )

Your mystery looks great Carol, well done on figuring out the charting error.

Your flowers look lovely. Irises were my Granny's favourites and something I don't have in my garden. Hmm must remedy that and get a planter already in bloom at the garden centre.

Lovely flowers and lovely pictures of them....I only had 3 daffodils and my 3yr old picked them for me and his Gran...lol

Enjoyed your stitching as usual, Carol. But I especially enjoyed the pics of your flowers. Maybe a month from now I'll have some pics to post of my rose bushes.

Your french garden is looking lovely. I might have a flower or two by the end of the week!!!