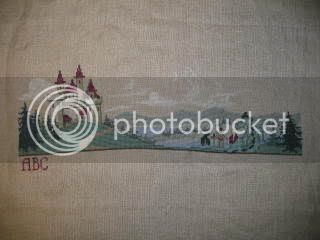 Today was my 43rd birthday... where does time go?? It was a quiet day. Mike took me up to the beach for a seafood lunch at Little Jack's. It was good, but the scallop meal was so heavy and I have been feeling it all day. I have been so bad with my eating habits lately, and I am really, really feeling it. Tomorrow I turn a new leaf... :-) Anyhow... it was Kingdom Sampler SAL night tonight. I fought the urge to stitch on this until 7 PM... I didn't want to jump ahead of Nikki by putting in extra time. So, I worked in my garden a bit and did some stash organization instead...

I received some really lovely gifts today - will post them tomorrow, as I got so involved in the aforementioned activities that I didn't get a chance to arrange them and photograph them... and Blogger is not even allowing the picture posting form to come up tonight...sigh. I was spoiled rotten by my dear stitching pals this year! I am so grateful for all of the amazing generosity. 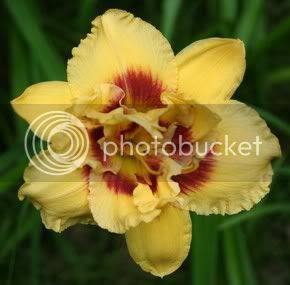 The two Chatelaine passwords came out today - at first glance, neither looks too, too overwhelming. With Martina's designs, though, looks can be deceiving... maybe they will be more burdensome than they appear. But, I won't be starting either until at least Wednesday anyhow.

You've had such an amazing birthday celebration, Carol! Stitching pals are the best, and it's no wonder to me that you've been thoroughly spoiled! You're one of the best at spoiling others. :D

I just wanted to wish you a happy birthday! Sounds like you had a great day!

Glad you had a lovely Birthday, Carol :) Love that Dashing Double daylily.
Von is so right, you're so good at spoiling others - you're always so thoughtful :)
Here's to a great new year! :)

Happy Birthday ,isn't it nice to be spoiled!

I don't think you had a birthDAY, you had a birthWEEK. It is lovely to see the nice things people sent to you. Kingdom Sampler is so cute and looks like you're almost done.

Happy Belated Birthday! Sounds like loads you have been celebrating for days. How kewl.

I've enjoyed all your pictures -- the flowers are beautiful! Your new blog template is very nice. Good choice.

Happy Belated Birthday Carol :) Sounds like you had a lovely day :)

Glad you had a nice birthday.

Glad to hear you had a nice birthday hun. Wow you Sampler is looking lovely, looking forward to seeing more.

Happy Birthday! And yay - a start on the alphabet! Looks beautiful!

What wonderful birthday gifts you've gotten, Carol! I agree with Von, stitching pals (of any age!! hehe) are the best.

I think I have the Kingdom Sampler in my stash somewhere...not that I NEED to start anything new! I guess I'll just try to catch up with some of the mermaid stitchers around here......

I love kingdom sampler, it looks so good, especially the dragon. I am glad you had such a wonderful birthday. :) Ann.

Carol, I'm late, but Happy Birthday!! You've had a wonderful one by the looks :) Well deserved!