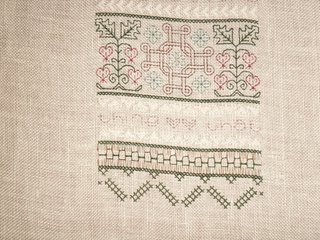 I spent some time today playing a bit of catch up with An Open Heart. I am pretty disappointed that this legacy linen really fluffs as I was drawing out the cut threads. It is not as smooth as when pulling threads on belfast linen. I hope it will work out OK when the satin stitching goes over it later. But I plan to move on to something different for later on. This one is too complex to stitch while watching football :-) 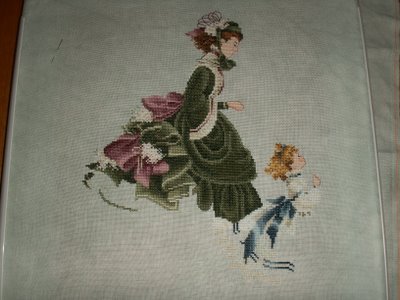 I worked for a bit on Little Wings again tonight while the football game was on (Patriots 31, Jets 21)... but not for long at all, the light was bothering Mike. That is a dilemma we have to work out as we decide how to arrange our new family room in the basement...

OK, I think that now is as good a time as any to review my Stitching Goals for 2005 that I had posted back on December 11, 2004.... how did I do??
Houses of Hawk Run Hollow: Well... I did get it started, and maybe I will even get through the second of the twelve blocks before this year ends...
Legends of the Dragons: Yes, Nicki and I stitched it as a SAL and we both finished!
Convent's Herbal Garden: I did put it back in my rotation, and it is averaging one to two days a month right now...
Angel of Love: Yes, I started it and am moving along well
Little Wings: Yes, I started this one, took a six month break from it because I had thought I wanted to switch to 36 ct, but have now chosen not to change anything... just got back into my rotation last week :-)
Celtic Band Sampler: Yes, Katrina, Dani and I stitched it as a SAL and all three of us finished - it is at the framer's right now!
Kingdom Sampler: No, but Nicki and I plan to do it as a SAL in 2006
17th Century Irish Garden: I have this as my at work project - and there has been almost no at work stitching time for a couple of months now... however, I am down to the outer garden borders now - one down, one half done, and two to go!
Rebecca's Sampler: No, not at all
Elizabethan Sampler: No, not at all
My Stitching Treasures: No, but Becky and I plan to do either this one or Jeannette Douglas' Autumn Stitches as a SAL in 2006
Roma's Garden: No, not at all
Anything by Brightneedle: No
Anything by Birds of a Feather: No
Anything by Just Nan: Yes, I stitched Peacock Cypher in a SAL with Karen K.
Anything by Long Dog Samplers: No, but plan to do Paradigm Lost in 2006 in a SAL with Jo
Anything by Drawn Thread: Yes, started An Open Heart as a SAL with Karen K. and Tannia - slow going but getting there!
Anything by Indigo Rose: Not really - I started Catherine Agnes, miscounted and cut the wrong set of threads... sigh... will restart in 2006!
Anything by Elizabeth's Designs: Yes, I stitched Green Old Gardens!
Finish Mermaid and the Sea: No
Finish Gathering Eggs: No
Finish Beneath the Stars: Yes!
Finish Harvest Moon: No
Finish Bag Ladies: No

Mike and I braved the day after Christmas traffic, in the pouring rain, and picked up Dark Water - the DVDs came out a day early this week... holiday commercialism at its best. I hope we can find time to watch it this week :-) That traffic was ridiculous out there today!

Stitched on today: An Open Heart and Little Wings
Posted by Carol at Monday, December 26, 2005

Carol, I've really enjoyed reading your last two entries. You have accomplished an incredible amount of stitching this year! That must feel great. I'm looking forward to seeing the projects you tackle in 2006. Hope the after-holiday period is very enjoyable for you!

Wow Carol, you have done so much this year! How do you find the time to stitch everyday without fail. I can't think of one single time since I started reading your blog that you've said you didn't have time to stitch that day. Your finished pieces are absolutly gorgeous.

Hi Carol: Awesome stitching list! I have enjoyed following your progress on each project for several months. You inspire me so much!! I am working my my stitching "list" for 2006 & may attempt some sort of schedule ... maybe will get more accomplished. Meanwhile, please continue sharing your pictures & needlechat ... a joy to my days for sure

Wow, you have gotten a lot done this year. Both An Open Heart and Little Wings are looking great! I am not brave enough yet to try cut thread stitch

Wow you have been a busy girl lol. Hope you had a great Christmas and look forward to stitching along with you in the SAL's.

You too have become a good friend to me this year, and look forward to seeing more of you lovely updates (fingers crossed that I get some lovely finishes in 2006 lol).

I can't get over all that I missed on your blog while I was away! WOW!

I LOVE all your framed pieces-they are all VERY gorgeous! Your walls are going to have lot's of new tentants, with those and the ones you got back from Karen!

I love the stocking from KAren-that's awesome and I would like to stitch it! VERY NICE!

I am looking forward to watching your goals become realities in 2006! You have so many wonderful (large) finishes for 2005-I know 2006 will be just as prosperous for you!

Yippee - you made some pretty good inroads to your 2005 goals ... it's a great thing to look back at the end of the year and see just what you've managed to accomplish - way to go!

Also, your framing done by Karen's DH was a wonderful gift - and I just told her so in an email yesterday ;) I just placed an order to spend some of my Xmas $ on some scissors etc. I also really really adore your pieces you just got back from the framers too - that's the nicest version of Fairy Flora I've ever seen! The fabric really sets her off beautifully - just gorgeous!!