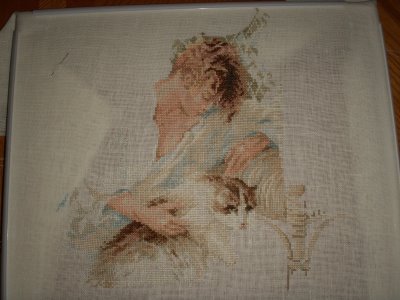 I really enjoyed having some time today to work on Girl with Cat again. I love this project, and am glad it was resurrected from UFO status this year. It has such a nice watercolor effect, which makes me think of my mom, who happens to be a watercolor artist and instructor :-) A lot of what I did today may well not even show in the photo - quite a bit of off white (DMC 746) on the kitty's tummy just does not show well on the white fabric in the photo (really stands out IRL).

I selected one of my Christmas gifts from Mike today - I signed up for Chatelaine's Mystery IX, and just ordered my kit... with any luck, it will be here before Christmas so Mike can wrap it up LOL! Anyhow... with its start date of January 1, I will probably start my Mirabilia SAL piece on New Year's Eve instead. (I have been warned that I will end up with Chatelaine burn out, but I really don't think that is true at all. I know how I can pace myself - I am sure I will be fine - what is the rush, right??).

I spent my entire morning and early afternoon trying to get BlogRolling to work in my blog - FINALLY, it works! Unfortunately, I have to put it at the end of my sidebar, as it seems existing items tend to cover it up.

I got some horrible news via email from my mother today. Christmas is very much up in the air for our family this year. My brother's father in law, Roger, whom we all love dearly, is in ICU. He has been battling some form of cancer for the past couple of years. According to my mom's email, it does not look good at all. He lives on Cape Cod, and my brother and his family are heading down there today as the roads are clearing nicely from the storm. Christmas is usually at my brother's house, so we will have to alter our plans... but most importantly, it is time to pray for Roger's recovery. Very sad. And the strangest part of it is that on Sunday, the 18th of December, it will be the tenth anniversary of my own father's sudden death - tomorrow, the 17th, is my niece Caitlin's 17th birthday - I don't think she needs to have both of her grandfathers pass away around her birthday :-( 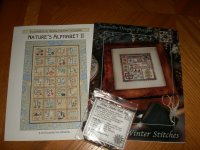 On a whole different note, I received some stash from Stitching Bits & Bobs today - the first part of which is some of the December releases. I got Elizabeth's Designs' Nature's Alphabet II, which I will be doing as a SAL with Katrina some time next year. And, I got in Jeannette Douglas' Winter Stitches with embellishment pack. This is the companion piece to her stunning Autumn Stitches that was in Just Cross Stitch just a few short months ago :-) 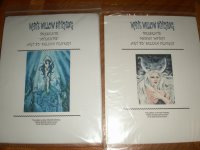 And... I also received two discontinued charts by White Willow Stitching, which I am thrilled to have been able to get! One is Atlantis, which has got to be one of the thickest charts I have ever owned (LOL!) and the other is Moon Witch. I have been tracking this one down for some time now, after having seen a stitched model of it on White Willow's website. I had shown it to Mike, and he was not at all impressed by it. But I am strangely drawn to Moon Witch.

Our basement is completed now. The carpet was installed today. I think Mike will be taking pictures of it very soon now, so I will post them when he does. I imagine he will do a better job of it than I could! 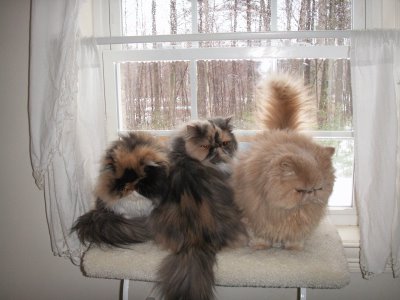 Speaking of Mike taking pictures... when I took the photos of my WIP and my stash off of my camera just now, there was a photo in there from earlier today that he must have taken - I thought it was cute! Here are three of my kitties all trying to squeeze in on their cat window shelf to watch the bird feeder today! (left to right: Ava, Lily, Gig)

Stitched on today: Girl with Cat
Posted by Carol at Friday, December 16, 2005

Watch out for Chatelaine burn out! That's where I am right now! I think its quite tempting to do all of her projects and then eventually you'll have enough. Which is kinda sad. I see some stuff I like but I really don't want to stitch any of her stuff for some time I think.

What a nice, full blog you have with the blogrolling down at the bottom - no shortage of things to look at!

Have fun with your new Chatelaine goodies!!

I am very excited that we will be stitching Mystery IX together in the upcoming year!! Have you checked out the tryout pattern yet. I will hopefully get to work on it on Tuesday.

That is one very cute cat picture BTW ;)

Hi, Carol, sorry to hear about the illness in your family - it's especially difficult here at the holidays.

I am also signed up for MIX - I haven't reached Chatelain burnout yet, quite the contrary. I'm looking forward to watching your progress. Margaret in Maryland

Awww what a ucte kitty lol. I can just about see the area you stitched hun, well done. Thanks for the comment on CA too.

Sorry to hear about your brothers FIL, I will keep him in my prayers hun.

Oh Carol, I am sorry to hear such sad news... I'll keep Roger in my prayers.

I received your cute card today, thank you so much! Your own envelope left on Thursday morning... The clerk told me you should get it in time for Christmas - I hope so!

You are making great progress on your lovely Girl with Cat. And the picture of your kitties is adorable.

Girl with a Cat looks as though a happy dance isn't too far away ... looks fantastic! And your windowsill full of kitties is just toooo gorgeous! What a crack-up!! Sorry to hear about Roger, though - it's terrible when these things happen around the holidays, as it affects all the holidays in the future. My thoughts are with you and your family at this time {{hugs}}.

If I stay next door...I would have catnap all your cats, they all look so gorgeous and fluffy. I like fluffy cats. They remind me of high-maintenance and being lazy...lol

My thoughts and prayers are with you and your family.