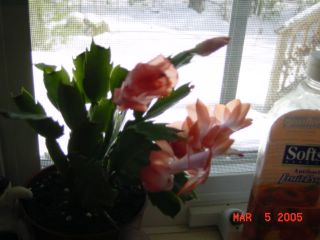 It is March, and there is snow everywhere, and yet my Christmas Cactus has decided to bloom rather abundantly, for the second time this winter season! What a nice treat! I am hoping my Spring Cactus will bud up right now, but it isn't - just more signs of what a strange winter it has been!

It is time to think again about having to go to "psychologist school," meaning it is time to look into more CE courses as winter is winding now, and I still need over nine CE credits to complete my requirements for my current two year licensing cycle. So.... today I signed up for Play Therapy and Beyond in Manchester, NH on April 7, 2005. I just hope the snow is over by then, because I really have to make sure I attend this, no refunds! The topic looks pretty decent, but it doesn't look very hands on since it is in a large hotel. That generally means they pack in a big crowd and we listen to a speaker all day.

We spent today running errands, such as grocery shopping and picking up the April 2005 issue of Just Cross Stitch for Katrina (apparently it takes a long time for the magazines to show up in New Zealand). We also watched Without a Paddle which was funny, but is more Mike's humor than mine... and now we are just starting to watch Flight of the Phoenix too (also looks more like a Mike movie than a Carol movie...). But thanks to an email from Jenn, I was reminded that the Red Sox were on TV, and I caught the ninth inning, just in time to see them win 8-7 over the Cincinnati Reds :-) Yay!

Your Christmas Cactus is lovely! I have never had any luck with them.

I hope you are having a wondeful weekend!