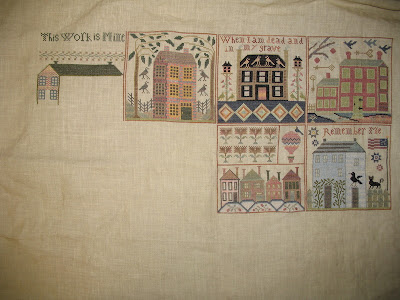 I did it - I finished that big green roof on House 1 tonight - it took most of the time I had for working on HOHRH tonight, but it's finished.

My thoughts and prayers tonight go out to the victims of the college shooting in Virginia. I just heard one victim is from the Boston area as well. What a tragedy.

Did anyone get to see my BIL on "Two and a Half Men" tonight? He was on in the last five minutes of the show. He played the best man at the wedding. When Judith came down the aisle and looked shocked to see Charlie in the wedding party, the camera then went to Ryan Stiles (the groom), and there was Steve, right over Ryan's shoulder. They showed him twice more in the wedding lineup when Alan and the groom's former fiancee were making a ruckus in the closet. Steve figured he might get left on the cutting room floor, but no - he was actually shown quite a bit! Very cool for him!

Wow, I can't wait to see how much the big Nor'Easter (storm) we are having affects the Merrimack River by my office - it overflowed in May of 2006... and now again! I wonder how my clients are doing. When this happened last year, several had to be evacuated out of their homes in boats. Sigh.... At least I am no longer in that office in Haverhill that leaked so badly when big rains hit. I bet that one is leaking right now - LOL

Stitched on today: Finished a gift, started a gift and Houses of Hawk Run Hollow
Posted by Carol at Monday, April 16, 2007

I hope you're staying dry, Carol! My mom is relieved to have rain instead of snow.

Cool for your BIL!! And HOHRH looks fabulous ... but not as good as what the mail fairy brought me in today's post! (Stay tuned more on this one once I catch up a bit with all today's party preparations!)

Well I don't watch much regular adult shows...last night was TLC which was Little People in a Big World night...my kids absolutely LOVE that show :) Plus they got all their homework done and already know their spelling words, so I had to let them watch..TV is their reward for good work. So sorry I didn't get to watch your BIL :( Glad he was in the shots tho' :)
Your HoHRH is just coming right along...weren't you lamenting not too long ago that you didn't know if you would get it done this year? Uhhh....I believe you will you're really making great progress. Hope the skies dry up soon!

HOHRH looks great as always:) congrats to you BIL. How exciting!

Congrats on getting the roof finished. I hope the rest of the house goes quicker for you.

I did see your BIL last night. Very Cool! I only caught him in the last shot. I'll have to go back and watch it again to see the other shots he was in.

Congrats! Now at least the inhabitants of that house have a roof over their heads... though they're still missing a few walls :)

That's great for your BIL!

The big green roof is on - congratulations!!!
In a previous post you showed your six lovelies - are they Maine Coons?

Great, I DVRed the episode last night, can't wait to see it.

HOHRH looks great,I bet that's so nice to be done with that roof though. Your Long Dog sampler is so pretty too.

Stay dry, I read about the storms and it don't sound fun.

I did watch last night! To be honest, though, I forgot to look for him. I guess I got a little caught up in the storyline. :( Judith's dress and hair was amazing, though. I would love to have hair (and hairdressers) like that!

Hurrah for the big green roof! It is looking wonderful. Hope you're all staying warm, dry and safe. We had tornados here on Friday night, storms, etc. Yuck. Can you give me info on Google Reader and how to use it?

Oh wow I am loving watching this one grow hun.

Hugs to ya xxxxx

Congratulations on completing the roof :)

Nope, I haven't figured out what to do yet about the Wenge on the AMAP Sampler, working on it though.

Your cross stitch is looking terrific. Hey,....how cool that your BIL was on TV.

And a lovely green roof it is!

Great progress this week. Big stretches of color like that can be so overwhelming.

Very cool that your BIL was on the show last night. It is neat to see people we know on TV. Usually when I see someone I "know" on TV it means they've been bad:) Ahh the joy of social work.

So sad about Virginia Tech and the shooting. It's just tragic that nobody cared enough to listen when his English prof. reported his bizarre writings!! What was up with that!! :7 Your Hawks Hill looks great. What threads are you using, Carol? I like the muted colors.
Deb

HOHRH is gorgeous, Carol! I am so loving watching your progress! :-)

Oh, and yes, I did remember to watch for your BIL on Two and a Half Men... How cool! I wasn't sure which one he was until I read this post though. :-)

I hope the flooding wasn't too bad... it's been colder here for the last couple of weeks but it's finally beginning to warm up again now! Thank Goodness! :-)