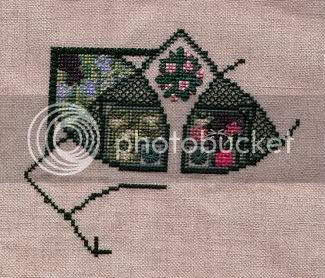 I worked on the iris garden tonight - it still needs backstitching, but I am not going to stay up to the wee hours of the morning tonight because I want to get a relatively early start on going to Celebrations tomorrow. My class isn't until 1 PM, but I want to give myself time to shop and maybe meet up with some of my new stitching friends too! 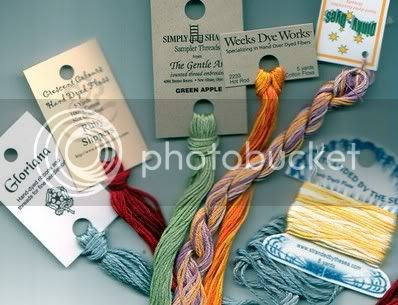 I received my April installment of Monthly Bits from Stitching Bits & Bobs today, and boy am I disappointed. I haven't done the math yet, but I doubt I got any kind of deal this month.... it is usually only about a $1 savings anyhow... and what is with these color choices? I have the distinct feeling that these threads are just their overstock that they could not sell. Well, thanks a whole bunch! They sent me a skein of Dinky Dyes Cotton Floss in Pacific Sunrise, a skein of Weeks Dye Works in Hot Rod (what would one ever use this for??), a skein of Crescent Colours in Ruby Slippers, a card of Stranded By The Sea floss in Yellow Tang (again, what would one use this for??), a skein of GAST Simply Shaker floss in Green Apple, and a 4 yd skein of Gloriana silk in Blue Heron... are any of these popular colors? Nope! I am either going to drop out or select the "wish list" option now, informing her of what I want to receive... not as much fun, but surely not as disappointing. If anyone needs any of these fibers I just received, just let me know!

Well, it is that time of year (at last!) when my thoughts also turn to gardening. Get ready, I go to the extreme with gardening, just as I do with stitching!! Today I purchased my first new garden addition for the year - a Theresa Hall daylily :-)

I found the sad article about Ben Franklin in Derry, NH closing, and figured I would share it here since so many of you haved commented on how sad it is to lose your "old reliable" local craft store :-( I love this guy who owned the store, seen in the article, he was always so helpful and friendly - if I didn't leave the store with 50 skeins of DMC, he would always ask is something was wrong, LOL! I hope he and his wife land well on their feet!

On our way out to dinner tonight, Mike took me to Michael's in Manchester, NH (craft store) - I wanted to scope out what they carry regularly now that Ben Franklin is gone... and I found they don't have much :-( However, I picked up some Nymo for beading and then found they had their cross stitch kits on sale, and was thrilled to get a great deal on The Guardian! I paid less than $20 for the complete kit! And, earlier today I went to the other Ben Franklin out in Raymond, NH - these stores are privately owned and this one is associated with Ace Hardware - it could not be more different than the one in Derry.... but may fare better as it is in a more rural area with less influence from WalMart and the like. Anyhow, they carry DMC and aida, for the most part. But, they also carry many Oberlin Samplers charts, so I treated myself to Cape Cod and Boston :-) They also carry four cross stitch magazines, so they were fun to look through, but none that I wanted this time around (Cross Country Stitching, Stoney Creek, Just Cross Stitch and Stitcher's World - I subscribe to the last two, though my Stitcher's World has not come in yet - can't wait for it now though, as the cover of the one I saw said they are featuring Maria Von Scharrenburg this month! The magazine is sealed in plastic, so I have to be patient now to see what lovely design will be in the issue!).

Picked up a new DVD while out tonight - Darkness - the previews looked good :-) I hope we will watch it soon!

Rangers 7, Red Sox 2.... something is really wrong with the Red Sox. Defensive errors, offense shut down.... injured pitchers, suspended pitcher... suspended manager... it just goes on and on! But, Ryan Newman had his best ever qualifying run for Talladega today - he actually starts 5th - let's hope that starting near the front of the pack will help keep him out of the many accidents that are destined at this track - but he will need a strong running car to stay up there you know... hmmmm.... hasn't really been happening much lately for him.

Hi Carol, hope you have a wonderful time at Celebrations and of course I'll look forward to reading about any stash purchases, lol!

its the darker beads in Emmy that I'm not happy with, can't recall what # they are.I'm sure I'll have something else in my 100's of pkts of Mill Hills that might work a little better - will let you know how I get on.

have a great weekend!

I have both Ben Franklin and Michael's in my area. I find that Michael's has a great selection of yarn, but are rather slim in the the needlework department. I always get my stitching things at Ben Franklin (unless I order them, of course), and don't know what I'd do if ours ever closed!