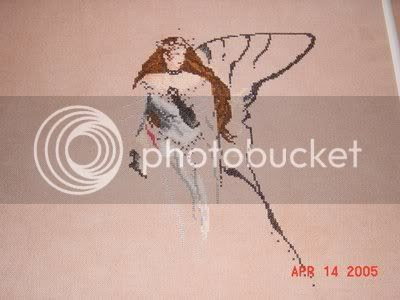 Tonight I chose to work on Miracle Butterfly - after waiting so long for the 010HL blending filament, I wanted to use some :-) I did more of her hair, some more of the body outline and some sparkly in her wings... during the Passione Ricamo SAL day on Sunday, I think I might do the beading of her tiara, outline her face and do the beading of her neck band... she will start to take more shape once that is done :-)

Much better night for the Red Sox - though the night was not without its dramatics! First our hitting coach gets ejected (NO clue why...), then our coach gets ejected for arguing.... but that was NOTHING compared to NYY's Gary Sheffield getting into a scuffle with a fan - the fan may or may not have tried to hit Sheffield in some way... it is way too unclear by the tape. But, what is totally clear is that Sheffield takes not one fraction of a second to react by swinging at the fan. Some news reports say he did not hit the fan, but I saw it live... it happened. What happened then? The fan gets ejected and Sheffield stays in the game?? What???? Since when can you hit someone and get NO consequences? (mlb.com acknowledges the incident as it was seen on TV: "Jason Varitek's two-run triple made it a three-run game, but as Sheffield went to field it, he appeared to be hit in the head by a fan who was reaching for the ball, prompting him to take a swing at the spectator. Security intervened quickly and no further swings were taken, though the game was stopped for a few minutes as tempers settled down.")

Just Nan has two gorgeous new releases coming out in May!!! I want these (of course) - Morning Flowers and Robin's Wreath - Nan just never fails :-) But, when, oh when, will Drawn Thread have some new releases???

The new issue of Just Cross Stitch arrived today - in general, not a thrilling issue.... but, Carriage House Samplings is a featured designer and there are two Carriage House samplers in this issue. Nice!

Stitched on today: Peacock Cypher at work and Miracle Butterfly :-)
Posted by Carol at Thursday, April 14, 2005