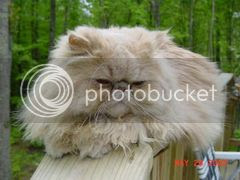 Happy Birthday Gig (aka "2 of 6," as we affectionately tag our kitties with this Star Trek term)... Gig is 4 years old today - very hard to imagine!

The mailman was "very good to me" today - he delivered Catherine Agnes by Indigo Rose - now I have to start collecting a whole bunch of Caron Waterlilies before I can stitch this beauty! And he also brought some Earth Threads class charts I traded for - Shaker Sampler and The Grape Sampler - yay! - as well as Butterfly Welcome, and older small chart by Just Nan that I had forgotten I got on ebay a few days ago.

I was high bidder this weekend for Kind Fond Love Sampler by Brenda Keyes too - nice sampler :-)

Well, my "new" office is starting to come together a little now, though I just don't care for the two-room format of this office.... my two colleagues teased me all morning about my "grumpiness," with Dr. Wangerin stating, "Oh, Carol is just going to be mad for a while, so we better let her!" But I am better. It took two hours for the phone man to get my lines hooked up this morning. More fiascos with the building, starting with the carpet guy being mindless when he laid the carpet in our waiting room last week - he blocked the utility room door and we could not get it open to access the phone lines. So, one of the workers came in not feeling well - he had been in the ER earlier in the day - and took the door down and cut it - but somehow managed to burn our new carpet quite badly in the process. Long story! In the meantime, the phone man sought other ways to find the connections, including taking over the office across the hall from me for a good half hour this morning - what a nice way to meet my new office neighbor! Ah well, everyone on the floor is very nice and the phone lines are in now!

But, now we are awaiting a very, very large snow storm, the type known in this part of the world as a Nor'Easter - given this name due to the path it takes, hugging our shoreline and dumping us with heavy snow (or rain, depending on the climate) - tonight it will be SNOW. Lots of snow. Looks like I will be home stitching tomorrow! Sounds good, but these storms are killing my income this winter....20 more days to spring, I just have to keep reminding myself of that! Around here, the calendar doesn't mean much, but Todd Gross on Channel 7 just told us that he does see a decent warm up coming our way - after we get through a rough week - so that supports the old saying, "March comes in like a lion, and out like a lamb." 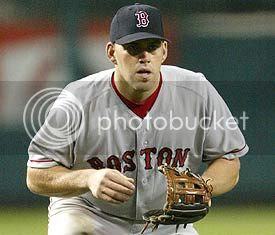 I post this pic from www.redsox.com as my show of support for Kevin Youkilis - he is vying for one of the two bench spots on the Red Sox team for this season - after the amazing performances of "Youk" last year coming up from the Paw Sox, I don't know how they could overlook him for the bench this year! Go Youk!


What Starbucks drink are you?
created with QuizFarm.comHmmm.... I am a White Chocolate Mocha! Sounds good to me - I used to love those before I started controlling my carbs :-)

Silly joke seen today on the sign of the local auto collision center - "What did the one cat say to the other cat on the cell phone?" Answer - "Can you hear me meow?" OK.... you gotta live in the States to get that one..... Verizon Wireless runs a dumb ad that has some dude roaming around on his cellphone saying, "Can you hear me now?" repeatedly to someone.... stupid, I know!

Let me just say that I LOVE your Blog. I followed your link from your post on my Blog and I have so enjoyed my visit with you. You have stitched some AWESOME pieces! I have enjoyed reading about other things on your blog as well :) I WILL be back for many visits!
Thanks for sharing!
hugs!
BeckySC

Hi Carol, your cat is a beauty. You know what, a lady in Paris would like me to adopt her cameo Persian cat (she's not at home enough to take good care of her), and her cat must look a lot like yours! I'm meeting the cat in a week :)

That is one gorgeous kitty. Hope he had a wonderful birthday!