Wow, it was really nice to have NASCAR back today, and the Daytona 500 was no disappointment. Well, except it was for Ryan Newman, in a way.... he ran really strong today. He had a bump with the wall midway through, which may have been his own fault.... but it didn't slow him down. Late in the race, though, here I was thinking he managed to avoid "THE BIG ONE" that found Scott Wimmer tumbling end over end (it seems to have to happen to someone there every year) 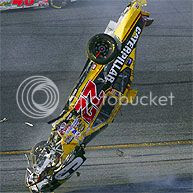 (photo from www.nascar.com), but nope - on the restart Mike Skinner was behind Ryan, and when he got slammed in the rear, he hit Ryan pretty hard, resulting in Ryan hitting the car in front of him (Carl Edwards?) and causing some front end damage that took him from.... 6th? 9th? to 23rd.... he must have pitted for repairs, but FOX didn't show that.... resulting in an unhappy 20th place finish, and 19th in points overall today. But there are many races left to go, so no need to be disappointed. It was still an amazingly strong showing for Ryan today. Oh, and congratulations Jeff Gordon, though watching you win is pretty boring to me. I think Ryan is going to have a really strong year!

We slept so late today, I guess we needed it. So today is almost over and feels like it only just started. My friend Karen started giving me details of her upcoming trip to the States. With some luck we might be able to get Red Sox tickets for when she comes in June, but since she will be in my area for only a day, that looks slim. The Red Sox are in Boston that day, though, so I will give it a try!

I ordered up some Mill Hill Treasures last night that were on sale from The Avid Stitcher - a mixture of ones needed for all of the Mirabilias I keep writing about getting ready to start....

And, here is a temptation that came in my emailbox today -

This beauty by Thea Dueck is being offered in Mystic, CT by Stitcher's Hideaway in November. I wish I could afford to go to this, but I doubt it. I hope Thea introduces this one to the public someday, though....

Hi Carol, I see such beautiful desigs come by! Enjoy stitching those. I think you have a lot to do: can you find the time?