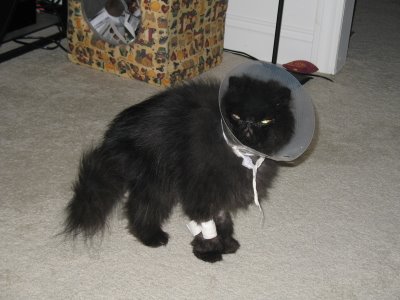 And, here he is :-) He has had a smooth transition back home. Only Beau appears to have an occasional hiss for him, and I am pretty sure that is because he sees Angus getting a lot of attention. It was snowy and very slippery out this afternoon when it was time to pick Angus up from the hospital, but Angus, my Jeep and I managed to stay safely on the road. Many others did not. He is so affectionate when his pain meds are working. They are about worn off right now, and he does not get them again until the morning. So, he is getting a little grumpy. As you can see, he has to wear an E-Collar. He will have that on until his many stitches come out, which can be up to 21 days. He has a ravenous appetite. I think he already ate three cans of Fancy Feast (the emergency vet recommends that for now - his regular vet, Dr. Ball, will discuss a diet with Mike when he brings Angus to him on Tuesday). Mike was concerned that Angus was visiting the litterbox and not voiding for the longest time today. He feared the worst. I tried to explain to him that Angus is very uncomfortable "down there" and cannot lick himself, as cats do when they feel discomfort there. So, he goes to the box in hopes of relief. I called the emergency vet and she said the same. So, I decided he needed rest and put him in a spare bedroom alone with a litterbox, food and water. After a while, he did void on his own. Mike broke into tears. I think this has been very stressful for him! Thank you all for your well wishes for Angus! I have some emails from some of you that I really must return soon! I promise, I will! 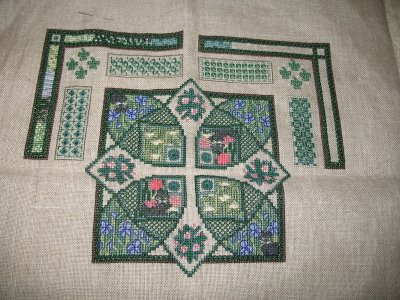 I have a monstrous headache tonight, so I ended up pulling out 17th Century Irish Garden for a little while tonight - after hours of indecision!! I haven't touched this in ages! I didn't do a lot, but now I am at least into the second outer border of herbs. I did finish the cross stitching part of the gift I started yesterday while we were waiting Angus out on the whole voiding issue, though. 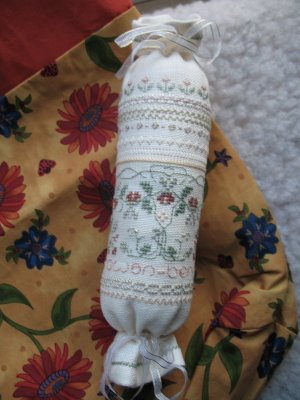 It's about time now for me to post some of the gifts I received recently from my stitching pals! Above is the rest of my gift box from Katrina - along with the ornament I posted a few days ago, she sent me her gorgeous Rowan Berry needleroll and a stunning autumnal colored tote to carry my stitching! Thank you so much Katrina! Everything is so beautifully made! 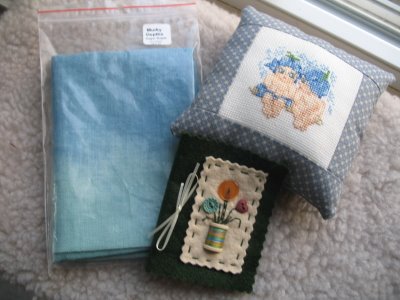 And, above is a mere part of a big box of gifts from Karen :-) She sent me this cute little pillow, as well as a larger one that is up in a guest bedroom now! I need to remember to photograph it! She also sent me this cute needlebook.... and adorable stick Santa ornament (on the tree - needs photo taken), and a FQ of Sugar Maple Fabrics' Murky Depths belfast linen!! And, for Mike, she made him one of the SB stockings! Karen, he extends a huge thank you - he loves it! I tried to photograph it and all three shots are blurry! Yikes! I need to try again, and definitely want to share with you all - it is amazing!

And, from Jenn, I received two charts from my wish list! She sent me Winter Beauty by Passione Ricamo and Ezmeralda's House by Brightneedle... as well as a pile of DMC floss! Jenn, you are wonderful - thank you!!!!

OK, headache... going to go rest and cuddle with Angus!

Stitched on today: Stitched on a gift, and 17th Century Irish Garden
Posted by Carol at Saturday, December 30, 2006

I am so glad Angus is home!!!! I am so glad you liked your pressies. Tell Mike he is most welcome and I am so glad he liked the stocking. I have been tring to get the photos off our camera to do a blog entry but we have had a battery problem. Bren is re-charging so hopefully we can try again as I want to show everyone the lovely gifts you gave me:)

Oh Carol, rest up. Sorry to hear you have a headache [no fun]. Delighted to see "Angus is Home".

I got the whole development and dénouement of Angus's surgery all at once... I'm glad he is finally home! Hope he'll be his true old self in no time.

Those collars are so hard for kitties to have to put up with - my Dan had to wear one when he had a shunt in his shoulder to drain fluids after a nasty operation and I thought he'd just die of shame before he got it off. (Dan was my million-dollar kitty. I think we've all had one...) I'm glad Angus is at home and that he's able to function pretty normally.

Those are some great gifts and I love your Irish Garden - wow!!!

Most of all, a very happy New Year to you and yours.

So glad Angus is finally home!! {{{{Hugs}}}} to you all - I hope the stress of the last few days is finally shifting.

I'm so glad Angus is home--- and boy did you get some wonderful gifts!

I'm glad Angus is home. You take care and get rid of that headache - Rest up a little.
Love your gifts that you received.

Happy New Year to you and Mike.
Hugs Su

It's good to see that Angus is home. I was (again) thinking of you and Angus again today.

I'm gald that you liked the patters that I send up to you. I had a lot of fun picking them out and you know one can never have enough floss. :)

Happy New Year to you and Mike!

I'm so glad Angus is home, even though he looks quite put out by that collar! Hopefully he's feeling all better soon! I love your Irish garden; I've wanted to stitch one of Liz Turner Diehl's designs for a while, but I've heard lots about the charts being unreadable and full of errors. How's it been for you?

Carol I'm so glad to hear that Angus is home and doing okay.

Wow you've got such generous friends!!!

Poor Angus, but at least he's home now and on the road to recovery.
Your Irish Garden is so pretty and I'm looking forward to future pictures of it.
Happy New Year 2007 to you and all your loved ones.
Margaret

Welcome home to Angus!!! Oh I am elated to see that he is home with you where he belongs!!! What a fabulous owner he has!! I am so amazed that even with a huge headache you are able to stitch on your beautiful Irish Garden! It is really pretty! Where do you find most of your Liz Turner Diehl deisgns? She isn't that easy to find for me and I love them. Happy New Year to you! Debby

Yeah....Angus is home and I hope he is feeling better soon.

I love your garden...those are so pretty.

What a wonderful way to end the year with Angus home and doing better. Hopefully the collar doesn't drive him to crazy. Irish Garden is lovely, I haven't seen this one before. Have a wonderful New Year,
Sue

Welcome home Angus!!!
Happy New Year to you all :)

Angus looks like space kitty in his collar-poor fella. That was a good idea putting him in his own room. I'm sure he'll be great soon.
Happy New Year!

Poor Angus ~ he doesn't look very happy but I'm sure he is relieved to be home. I'm sure he'll be back to himself in no time with his Mum & Dad looking after him!

I'm glad you received such lovely things in the mail to help cheer you up, Carol.

I'm so glad Angus is home and OK. Poor poppet. He doesn't look happy about that collar but I bet he's so glad to see you.

The gifts you received are gorgeous :)

I have just read all your Angus updates Carol. What a mission for you and Mike. Iknow how you feel as our pets are treasured here too. That cost is horrific. Angus will love you for it though.

Love your finishes and all your little gifties, they are just stunning.

You take care of yourself and Angus, Carol! It's been a stressful time for all of you. I wish you peace, my friend, and a Happy New Year!

Welcome home Angus...speedy recovery to you! Poor Mike! I teared up when you said that he got emotional over Angus being able to void. It is hard on the human counterparts when their furry loves aren't feeling well. Hand in there...it's looks as though Angus is well on his way to feeling purrfect again!
17th CIG is really pretty! Looks like a lot of stitching though, that would be one I would have to set aside for awhile too!
All your goodies are so pretty, You deserve them! Happy New Year to you and your family!

I just finished with an E-collar on my puppy...I hate using those for them...I actually had two...my puppy ripped the first one! Happy New Year!!!! (PS Love your stitching!)

Hi Carol, I am glad to hear that Angus is home and doing well. Your gifts are beautiful. Hope you get rid of that headache. Happy New Year to you and Mike!

Happy New Year!!!!!
So happy to hear Angus is Home and recuperating.
I hope you have a wonderful 2007 with lots of stitching time

So glad Angus is home! You've gotten some great gifts!

I've been reading and enjoying your blog now for a couple of months. I absolutely love your stitching.

I'm so very happy to see Angus home and doing well. I've been thinking of him (and you) throughout his ordeal. Glad he's finally on the mend.

Carol, I LOVE seeing your progress on Irish Garden! That piece is on my wish list and I am always inspired to keep it there when I see your work on it!

Is Mike still selling the Ginghers? I have decided I need to treat myself to some decent embroidery scissors! Does he have a web site or can I just find him on ebay? Let me know 'cuz I'd rather buy from him and contribute to the "Angus fund" then buy from someone else. :) And speaking of Angus, I am so happy to hear he's back home and doing better--yay!