Angus is in the hospital :-( 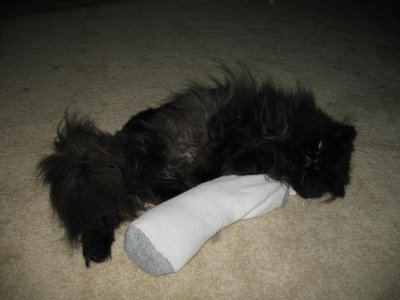 My poor Angus has taken ill and is in the hospital tonight. Mike noticed today that he was very lethargic. He did not eat or drink water - Angus loves water, and will even sit at the Poland Springs dispenser and beg for it. We noticed he was really unsteady on his feet as well, and when he would try to use the litterbox, he would strain and have no results. I rushed him to animal emergency in Manchester, where they rapidly diagnosed him as "blocked." At first, I thought they meant his bowel, but they meant his urine was blocked. He is sedated, unblocked and on a catheter now. He will be for at least 24 hours. His bloodwork is all messed up as a result of this sudden kidney issue. The nurse told me on the phone that his urine was the color of merlot. We all know that is not good. I just checked on him again, and he is still quite sedated from valium, but is awake and alert, is tolerating the catheter well and urine is flowing freely now. There is no news on why this happened. He was (surprisingly) very dehydrated when he got to the hospital. His next bloodwork will let us know more about any possible damage. I feel so badly for him. Mike and I are a bit wrecked about this. The photo above is from a couple of months ago (he is rolling on a catnip filled sock). One thing the vet is factoring in seriously is that Angus may well be stressed by the presence of houseguests here. When he gets out of the hospital, the house will be clear of guests - hope that helps him! 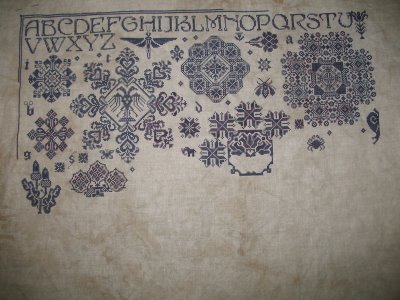 I was able to put some good time in on Paradigm Lost while I sit here tonight thinking about Angus and trying to relax... I did little bits here and there tonight...

New DVD Release Tuesday - got Lady in the Water

Carol, I've just popped online to check up on a few friends. I'm so sorry to hear that your dear Angus is ill! Hope all clears up for him soon and life returns to normal for all of you! Hugs!

Oh poor little kitty! I hope that he's better soon and that you and Mike are ok.

Hugs to all of you!

Oh Carol, I'm so sorry about Angus. Here's some {{{{hugs}}} and good thoughts and I hope he's better soon!

I'm so sorry to read about poor little Angus. I hope he makes a speedy recovery.

I managed to stitch on PL yesterday since it was raining and no one felt like doing much :)

Hugs to all and not forgetting the rest of the cats. :)

Oh, I'm so sorry to hear your kitty is sick. It's so heartbreaking when they are ill and can't tell you. *hugs*

Oh, dear Carol! I hope Angus will be right as rain in no time, and that there will be no recurrences. He's a gorgeous kitty, as are all your cats. Sending you hugs, and cuddles for Angus!!

Oh poor little Angus. :( I'm glad to hear that he's doing better thought. I'll keep him in my prayers. {{{HUGS}}} Catnip socks seem to be bit hits with cats. Misha has one too.

Aww poor Angus. I hope he's home and well soon. Similar happened to my mums cat, Toby, last year. He was straining and crying when he was trying to pee and went very poorly within a matter of hours overnight. It turned out he had crystals in his urine and they had blocked him up. In his case they said it was because he doesn't drink enough water, but as Angus loves water then I doubt it will be the same. We were told to make Toby drink more water, but how on earth do you 'make' a cat do anything lol. He's been ok since his operation though.

Good progress and sending positive vibes for a quick recovery of Angus. Ann.

Poor Angus! I hope he is much improved and home in time for Christmas. I never would have thought animals get stressed by visitors!

So sorry to hear about Angus. I hope he is home and well soon. My mom's cat gets a Urinary Infection everytime she has company. Your M9, Mermaid, Bordeaux and PL are all looking amazing - how do you find the time to stitch on all these amazing pieces??? I am very interested in a pair of Cheetah scissors too, if they're still available! Big Hugs to Angus when he comes home!

Poor Angus! I hope he gets better and comes home soon.
I'll tell you, the few times my brother has been up from Florida, I have gotten sick,so I can relate to
'company' stress.
I had a vet that said too much seafood cat food makes the kitties form crystals in their bladders. My cat Cos loves it, but we try to watch what he is getting two helpings a day.

Poor Angus! I hope he gets better and comes home soon.
I'll tell you, the few times my brother has been up from Florida, I have gotten sick,so I can relate to
'company' stress.
I had a vet that said too much seafood cat food makes the kitties form crystals in their bladders. My cat Cos loves it, but we try to watch what he is getting two helpings a day.

I hope Angus is much better by the time you read this!! I hate it when our pets are poorly so know how you and Mike feel!

Awwwww nooo poor Angus, hope he is feeling better soon hun. Thanks so much for the Christmas Card it arried today.

PL looks grea Carol, can't wait for the next installment.

I'm sorry to hear about Angus....I'll say a pray for him and YOU!

oh poor Angus :(
I hope he gets better soon

So sorry to read that Angus is ill. I hope he is much better soon and back home with you.

Poor Angus! I hope he's doing better and gets to come home soon.

This is quite common in boy kitties, but hopefully he won't have this problem again!

I hope that Angus will be home and good as new in no time. *hug*

I'm so sorry to hear about Angus. I hope he is back to his normal self soon. I know you must be so worried about him. ((BIG HUGS))

Carol, I know all too well how serious FUS can be, we've been through it several times. Angus is in my prayers for a speedy recovery (and probably a change in diet). Stress does alot to those little furry bodies.
Shirley, Connecticut

Poor little guy...I hope that he is feeling back to his old happy self soon! Cooper and Zoe send kitty hugs:)

I'm so sorry that Angus is ill. I hope he recovers quickly and that they can find what caused it and hopefully prevent it from reoccuring. I have 5 furbabies, so know how much a part of the family they are and how hard it is when they are sick or away from you. {{hugs}}.
Sue

Good thoughts sent your way for a speedy recovery for Angus! Hugs to all of you