Another one on the homestretch 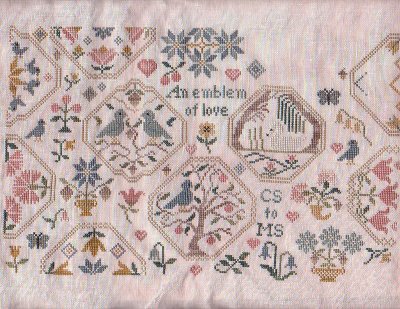 An Emblem of Love is officially on the homestretch now. I figure maybe another two Mondays and it should be all done. I will miss it. I think this has been my favorite project to work on for a while now. I tried scanning it about six times tonight, and no matter how I tried, some part or other would get a little cut off. Here is my final effort... you get the idea :-)

I got some emails tonight that several gifts I sent off were all received today (there were three, but I got one email too late - I had already put the photos in my blog today - so I will post that one tomorrow). Margaret received her gift today - and I think this is actually her official birthday too - I didn't make her a fob :-) The design I chose for her was too big to make into a fob. Margaret and I, along with dear Leslie, took a class with Liz Turner Diehl at CATS in September. So, I chose a Liz Turner Diehl design for her. I made it into a pincushion for her. This was my first time adding cording to a project, and I think it came out OK... thanks so much to Anne, who coached me along a bit and sent me some great tutorial links and photos of her own projects to help me out - thanks Anne! I had to photograph this one on a hand towel - it was a bit rainy out the night before I took the photo... 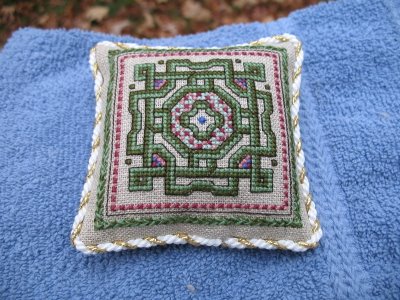 And, another gift that was received, this one was for Debby - her birthday is later this week. I noticed Debby likes Little House Needlework charts, and while trying to decide on what to stitch for her, my eye caught my newly acquired Country Cottage Needleworks chart, Forest Snowfall, and I decided to use elements from that chart to make a fob. There is a little tree on the back of the fob from the chart, but I forgot to post that photo! Maybe Debby will share it in her blog. I used the called for linen, but it was hard to photograph at 8 AM on an overcast winter morning before work... the snow and snowflakes do show up better in real life :-) It is also hard to see the tiny clear beads around the edges that look like snow crystals. 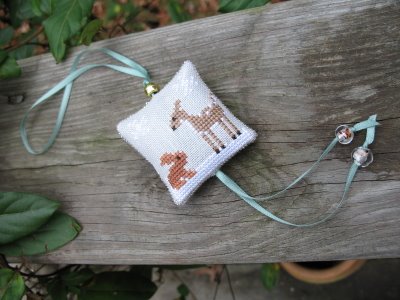 Stitched on today: Started a gift, Women of the Mayflower and An Emblem of Love
Posted by Carol at Monday, December 04, 2006

Congrats, Carol!!! Your scissor fobs are all lovely. You're making a great job. i'm sure you'll miss An Emblem of love because it seems to be a nic pattern.
Happy stiching!

Wow Carol, more gifties! And they are all so perfect - so personalized for each recipient, and so pretty! I take my hat off to you!
An Emblem of Love is simply gorgeous. :)

EOL is beautiful as are your gifts, you have made the pincushion lovely, both things are very pretty :)

Wow! Your stitching and finishing is beautiful as usual! How do you DO it?! You stitch faster than...I don't know what, but it IS fast! I keep looking for "speedy needles" in the stores but haven't found any yet! LOL! However, I am convinced you have some! Or maybe they're magic. hmmm..?
~Lana~

I do love celtic design, and I find your one very beautiful. Your emblem of love is fantastic too. Congratulations from a French stitcher.

EoL is looking stunning and your fobs are gorgeous. Congratulations

Woohoo, more gorgeous gifties! I'm glad I could help, and your pincushion looks adorable :D As I said to you via email, you're now my Finishing Queen ;)

Carol, EOL is just beautiful; I can't wait to see it finished! And I LOVE your Liz Turner Diehl pincushion; the design as well as the colors are simply stunning. As always, your finishing is terrific!

Carol, you're really rolling on these wonderful little gifties! Glad you're taking us along on the ride, it's great fun to see them all. :D

Wow Carol! EoL looks fantastic and is definitely close to a happy dance. The pincushion and fob that you made look wonderful, too. You tackled the cording like a pro!

Two more lovely gifts - and its wonderful to see how much thought goes into each one.

Your gifts are all gorgeous Carol, and EOL is very beautiful. So nearly finished!

Your two gifties are beautiful! Great choices and you did a wonderful job finishing them as well! EOL is beautiful. It is no wonder you are enjoying it so much!

What lovely finishes, I especially like the celtic pattern. EOL is beautiful as always, I'll miss seeing it when you're finished.
Sue