A visit with Angus 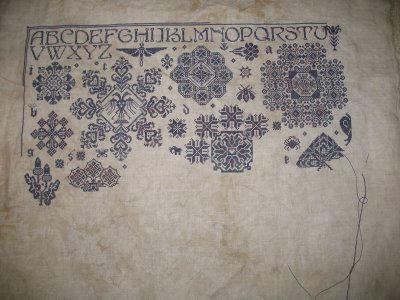 A brief break today from beading Mystery IX as it is SAL day with Jo (who is keeping up while on vacation in NZ :-) Excellent!).... again, I did a bit here and there... moving along fairly well, but tomorrow I am back to beading :-)

Angus Update: My brother dropped Nicole off at my house bright and early this morning, so she was interested in coming to the vet with me. I thought we would meet with the doctor to set up his PU surgery, but I was told when I got there that she was getting ready to call me. They decided to take an x-ray yesterday, and it revealed that he has some kidney stones. They are the type that cannot be dissolved :-( So... do they do the PU? Do they go in and remove the stones? Will the stones pass on their own after his urethra is widened due to the PU? No answers. That is the theme, you know. We want timelines, and we aren't getting any. Mike spoke with the vet today, and she was to do an ultrasound this afternoon and let us know tomorrow what surgery (or surgeries) are needed. Of course, the price is going up, up, up. But... on a good note, I asked if I could see Angus and the vet was happy to oblige. She brought him into the exam room and left us alone for well over an hour together. He was really excited after it took him a couple of moments to realize Nicole and I were there. He was eager to hug my hands and hers with his head... then he even hugged part of the exam table - LOL! His spirits are bright. He has his catheter in and his IV in. His face was dirty with medication, so I spent a lot of time cleaning him up and grooming him. I called Mike and put the cellphone near Angus - he responded rather dramatically to hearing Mike on the phone. It was good to see him doing this well, even though he has issues that need to be resolved. I took photos with my cellphone, but Mike needs to transfer them to his phone and then to my computer. He was busy programming tonight, so I will ask him tomorrow. Hopefully I can post a cute photo of him tomorrow :-)

Wow, so many stitching bloggers have or had ill pets lately! My sincerest condolences to Red over the loss of her kitty in recent days! How tragic! And well wishes to Joanie for her dog, and Mary for her kitty - both are ailing too! As well, I hope Jo's Emma is recovering too! {{{Hugs}}} to you all!!

Stitched on today: Started a gift, and Paradigm Lost
Posted by Carol at Tuesday, December 26, 2006

Thank you for the update and all the best for Angus and you all too. Ann.

Carol, wow what a time you're having with Angus. I'm at my parents computer and it doesn't always cooperate, so I hope this publishes.

Aww, I am so glad you and Nicole got to see him. I bet that made him feel a whole lot better. I hope angus gets to come home soon.

It made me smile to read that you got to spend time with Angus today. I do hope he gets to come home soon. {{{hUGS}}}

Oh, gosh, Carol, Angus sounds so sweet and cuddly! I have my fingers and toes crossed that some good news will finally break for you!

I'm glad that Angus seems to be feeling better and was happy to see you. Seeing him be in better spirits must have been wonderful. I hope they can resolve his issues soon so he can come home.
Sue

Hope Angus feels better soon! It's tough when you have a sick kitty on your hands.

Beautiful progress as always on PL. How frustrating that you are not getting more concrete information on Angus. I am so glad you got to see him though and spend some time with him - that will probably do him a world of good. Poor baby - big hugs to him!

My heart goes out to you! Poor Angus sounds very sweet, especially considering the pain he must be in! I'm glad you got to spend some time with him though! Lots if hugs and prayers for you all!

Poor Angus...Cooper and Zoe say kitty prayers for him everynight. I hope is feeling better soon!

On a happier note...all your recent stitching looks fantastic. I bet your girls did a wonderful job helping you look for all of those spilled beads:)

I'm glad that Angus is in good spirits. How lovely of the vet to give you some nice time with him. One way or another, I'm sure that they will figure out how to get rid of the stones so that Angus can void on this own again and come home. *hug*

PL is coming along beautifully!! So sorry about your kitty.

That's great that you got to spend some time with Angus, and that he's in such good spirits. Fingers crossed they'll come up with a solution soon and get him fixed right up {{hugs}}

I'm so glad you got to see Angus and he seemed happy. Poor kitty. It's been a while and it must be so frustrating. I'm sure you just want him well and home again. {{{hugs}}}

Hope that all continues to improve and Angus gets to come home soon!

Carol I keep checking in to see how Angus is doing.

I hope everything can be resolved.