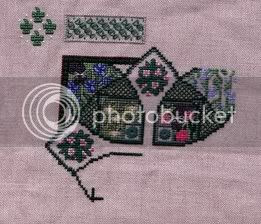 It has been a while now since I worked on 17th Century Irish Garden, so I dug it out tonight and stitched away - I was really distracted all night what with an exciting Red Sox game and also an acting out client paging me via the answering service and needing some attention, so I did not get as much done as I had hoped I would.... Funny, my irises are really starting to bloom in my garden now and that is exactly what I am stitching on this garden right now too :-) 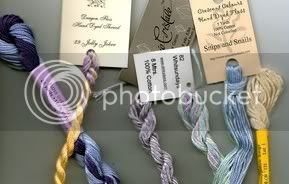 I just received my May installment of "Surprise Me" threads from the Monthly Bits Club, and after communicating nicely with Bobbie about this last month, I am now receiving more subtle threads... and am soooooooo much happier! These are all very useable this month - thanks Bobbie!! I got Crescent Colours in Snips and Snails, Dragon Floss in Jolly Joker, Dinky Dyes in Whitsundays, Needlepoint Inc silk in 131, Soie Cristale in 1092 and Needle Necessities in 175. I look forward now to next month!

Congratulations to Jenn!! She just won the bingo game I was calling over on the New England Cross Stitchers board! Her gift certificate will be ordered this week for her!

I also got in that good sized order from ebay - The Bookshelf chart, Thread Gatherer Silk 'n Colors in Spring Pastels for when I eventually get to stitch Zella's Garden, 02031 Mill Hill beads for Autumn Fairy Spirit, and a whole pile of 12065 Mill Hill Treasures for Lilly of the Woods (that larger cut blue solo I ordered for this should be here any minute now, so I plan to start her soon... as if I need yet another big project in my rotation, but I have to start this one!!)... oh, and also in the package was the new Mirabilia bee freebie chart! Yay!!!


What Planet Are You From?
**Playing little blog "games" again today :-)

Red Sox 5, Orioles 1... catching up towards first place now, while the Yankees fell back a game... gotta savor this while it lasts - but at the cost of Johnny Damon being taken out early and needing four stitches on his brow after crashing into the wall... sigh... hope he will be OK for tomorrow! (Hope he will be OK, period!)...

Got some cool news last night! OK, nobody cares about this except for me... but I was watching a NASCAR show on the Speed Channel before going to bed last night, and I learned that Ryan Newman raced in the Busch Series race on Saturday - he now has a Busch team! The car looks the same, but bears the number 39... Michael Waltrip was saying it is his old open wheel driving number. This is so exciting! I was really hoping Newman would run some Busch races, and now he is! Poor Mike, he has to suffer through my watching Newman up to twice a week now instead of only once - LOL!!

And of course, DVD New Release Tuesday again today, for us this week it is Boogeyman!!

Stitched on today: Peacock Cypher and 17th Century Irish Garden
Posted by Carol at Tuesday, May 31, 2005

17th Century Irish Garden is coming along nicely, the purple really stands out, those must be the iris' :)