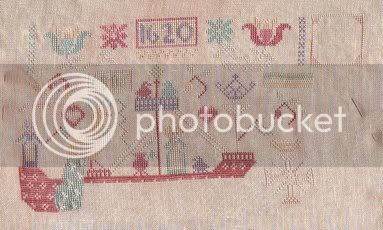 It took me a long time to get up and running today, as I have decided that it is necessary to change my coffee drinking habits. After I was upgraded to a XL coffee at Honey Dew Donuts yesterday (due to a drive thru clerk's error), I had some terrible caffeine overdose symptoms last night. I didn't drink any coffee today, but I gave in during the mid-afternoon and tried the new Diet Pepsi Jazz Strawberries & Cream (very good). I know quitting caffeine cold turkey is ill-advised, and my low energy, depression and argumentativeness with Mike earlier in the day was also proof of that. As well, it is impossible to totally exclude caffeine in my life. So, changes is what I am shooting for here. So, eventually the Diet Pepsi kicked in and I was able to stitch. I worked for a bit on Women of the Mayflower, and I got a few more motifs done, and one started. I also did another tedious row on the ship's hull.... I feel like mine is a watercolor version compared to the model, even though I am using the called for flosses. My dye lots are not like theirs, and I am using only one strand of floss since I opted to use 36 ct linen (the model uses two strands of floss on 32 ct linen). My fabric color is not significantly different than theirs... so I guess the one strand issue is a key factor. I just don't care much to stitch samplers on anything other than 36 or 40 ct linen.... My only real color concern with this one is that I am not sure that the words "Women of the Mayflower" will show up well using the one strand of Gratitude Olde Rose, as is called for... it doesn't show up all that well on the cross to the right of the ship, and I think that wording is significant. So, I will give it a go, and if it is too light will try using Shacklewell Wine instead...

I stopped in at the Christmas in August sale at Colonial Needleworks earlier today, and I got the 2006 Prairie Schooler Santa kit - cool :-)

Stitched on today: Women of the Mayflower
Posted by Carol at Saturday, August 05, 2006

I really like the effect of one strand of floss on 36 count. I think your version of WOTM looks beautiful!

Hi Carol- One strand of floss always lightens the color, but I think WOTM looks great! And I agree that by the time you get to the wording you may realize you need a darker color. The piece has a very dainty feel to it, even though it is a sampler. But it is about women, so dainty fits right in.

WOTM looks beautiful anyway. I'll have to look for that Pepsi flavor; normally I'm a diet coke fiend, but like to try something new sometimes. I agree about the 36-40 count issue; I am working on a couple of 32 ct. projects and the stitches seem so large in comparison.

It is looking lovely. Great work!

I have never seen that pepsi flavor down here, but I do get Diet Dr. Pepper Berries and Cream which is good:)

Ah, caffeine. The evil of evils and drug of choice for most people. ;) That new Pepsi flavor sounds good. I tried the new Dr. Pepper Berries & Cream and it's pretty good, but I think I'm still a die-hard regular Dr. Pepper flavor fan.

Your WotM is looking really nice! I can understand your concern about the color of floss being used for the title. I'm sure you'll work it out, though. You always do. :)

I always love to visit your blog because there is always something lovely to look at - Women of the Mayflower is looking just wonderful!

Good luck on cutting back on the caffeine! I know you can do it.

I think that your WOTM looks great.

I know you are already in a RR, but did you know that there is some talk of a Spot Sampler RR on the RR Board that i thought you might be interested in. Especially since you like samplers so much. This one sounds fun since it would incorporate so many different motifs and stitches. There is a tenative talk of starting in 2007. Maybe something you would like to join in on?

WOTM looks so good! I am going to pick that back up when PS is done. I hope it is tonight which means I have to speed clean. Ugh, cleaning. But, it has to be done. Anyway, cafeeine is trouble but I bet weening yourself off of it will work okay. I didn't even know there was a Diet Pepsi strawberries and cream. That sounds quite tasty. Ann.

I think it looks lovely and delicate!

This is just beautiful - you are doing an excellent job with this design!

Caffeine is a trickie thing. I gave up coffee last Fall/Winter -- I still want it all the time, i just settle for hot tea! I found coffee was making me hungry & I was eating more. Not so with the tea. Good luck finding the right combination or amount which works for you.

btw, I use lots of needlework tools. I just have not had the time for blogging recently. When the kids are back in class, I'll have to catch up on the SBQs. I like the Star-d-tailor, needlebooks, magnets, crochet hooks, pink hair tape, magnifiers, etc. I have several small drawers full of stuff that I luv :)